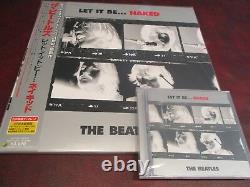 T HE BEATLES - LET IT BE NAKED - OUT OF PRINT FOR A DECADE NOW RARE COLLECTORS ORIGINAL 2003 RELEASE 1ST EDITION JAPAN OBI PRESSING. TREMENDOUSLY RARE NOW IN BRAND NEW CONDITION AND JUST THINK HOW MANY CHANCES OVER THE YEARS WILL COLLECTORS HAVE THE CHANCE TO OWN BEATLES 1ST EDITIONS? THIS WAS THE 1ST TIME THIS NAKED PRESSING WAS EVER RELEASED AND THAT WILL NEVER HAPPEN AGAIN.

NEW NEVER PLAYED Sealed LP with Gatefold Cover , Picture Sleeve, 7 INCH SINGLE and 20 Page Booklet. 2ND PICTURE SHOWS WHAT COMES INSIDE THIS LIMITED EDITION MASTERPIECE. THIS IS A ONE TIME ONLY PRICE ON THIS 1ST EDITION SO DON'T MISS OUT. PROBABLY THE MOST LIMITED EDITION HIGH QUALITY PRESSINGS EVER OF THESE BEATLES TITLES. THAT HOW RARE THESE RELEASES ARE WITHIN THE COLLECTORS MARKET. NO ONE CAN BEAT THIS PRICE. SO DON'T MISS OUT THIS BEATLES COLLECTIBLE FOR YOUR TURNTABLE OR COLLECTION. To protect the covers from damage. Once inside the our warehouse we then protectively seal the title in a loose re-sealable plastic cover to ensure the quality of the product. This title is brand new & never played condition. Don't Miss out BECAUSE THIS TITLE IS NOW CURRENTLY OUT OF PRINT AND COULD BE GONE FOREVER.

This album has been direct-metal-mastered from a digitally re-mastered original tape to give the best possible sound quality. Mymusicfix has listened to it AND IT SOUNDS GREAT! Rare, Limited Edition, one-time pressing - booked on futures - immediately Out of Print - OBI sash - Japanese Pressed by Toshiba/EMI. PLUS FOR YOUR CAR STEREO WE ARE ADDING THE 2 CD SET. Pictured on right sealed - Pictured on left with all inclusive contents - 20 page booklet and picture sleeve 45 RPM 7 disc.

The Beatles have often spoken about how Phil Spector drowned their sound in orchestration on the original Let It Be , released in 1970, and Paul McCartney has vowed to rewrite history by having the version originally intended finally released and that's what we have here. Here it is with an additional 7 Disc of Fly On The Wall, a unique insight into the Beatles at work in rehearsal and in the studio during January, 1969. The Long And Winding Road 5.

I've Got A Feeling 7. Don't Let Me Down 9. Stereophile February 2004 Recording of the Month! As it was meant to be. The band's cut from the original sessions plus a 21-minute Fly on the Wall Bonus Disc! The Beatles have often spoken about how Phil Spector drowned their sound in orchestration on the original Let It Be release in 1970 and Paul McCartney has vowed to rewrite history by having the version originally intended finally released. The Long And Winding Road. I've Got A Feeling. Don't Let Me Down. A unique insight into the Beatles at work in rehearsal and in the studio during January 1969. FACTORY SEALED OUT OF PRINT PRODUCT is IRREPLACEABLE and therefore NOT RETURNABLE.

Because of Postal Regulations in following countries -- U. (England, Ireland, Wales and Scotland), SOUTH AMERICAN COUNTRIES, QATAR, PHILIPPINES, SRI LANKA, ISRAEL, RUSSIA, MEXICO and MALTA. Mymusicfix has been told we have the best collection of Rare, Out of Print music collectibles on E-Bay. The item "BEATLES Let It Be Naked JAPAN 1ST EDITION ORIGINAL OBI LP +7SINGLE + BOOK + CDS" is in sale since Friday, January 4, 2019. This item is in the category "Music\Vinyl Records".