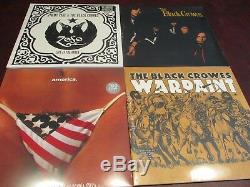 BLACK CROWES ORIGINAL 2007 RELEASE WITH THE VERIFICATION STICKER THAT STATES THIS IS THE COPY WITH THE PICTURE DISC & 7 INCH SINGLE WITH BONUS TRACKS THAT WAS ONLY AVAILABLE ON THE COLLECTORS 1ST EDITION ISSUE AND IS SO RARE IT CAN'T BE FOUND ANYWHERE STILL SEALED. LIMITED EDITION PRESSING FROM THE ORIGINAL LABEL THIS PRESSING IS OUT OF PRINT. PLUS WE ARE ALSO ADDING THE 180 GRAM BLACK CROWES. LP + 2000 LIMITED WHITE VINYL 3 LP SET OF JIMMY PAGE AND THE BLACK CROWES AND LASTLY.

180 GRAM LIMITED EDITION 2 LP SET. 4 TITLES WITH 8 SIDES OF VINYL. & TYPE IN SOULROTATION INTO THE SEARCH FIELD WITHIN OUR STORES SECTION AS YOUR PERSONAL CODE AND ALL INDIVIDUAL TITLES + INFORMATION WILL APPEAR.

Check out my other items. Out of Print - Classic Analog Vinyl - Factory Sealed LP.

The nicest thing you can do for your stylus and ears. The ultimate record the way music was meant to be heard. You should never pass up the opportunity to upgrade your collection. They're each very limited in their pressings and disappear with extraordinary quickness from the vinyl market.

This causes prices to skyrocket because once they are gone, they are gone forever! Don't second-guess yourself with this chance to upgrade your collection because before you know it, the opportunity will have passed forever. Is The Black Crowes' first album of all-new studio material in seven years WHEN RELEASED IN 2007. WITH THE PICTURE DISC & 7 INCH SINGLE WITH BONUS TRACKS. Mention The Black Crowes to any music fan and you will get a jaw-dropping response! The title of their new effort is said to signify the revolution that could take place in all our souls. " Produced, engineered and mixed by Paul Stacey, Warpaint features 11 songs, all of which were written by Chris and Rich Robinson, except "God's Got It by the Reverend Charlie Jackson.

Available in the US for the First Time on Limited Edition Triple White Vinyl! In the Summer and Fall of 1999, one of the best live rock'n' roll bands and rock's greatest guitarist united for a tour across the States, performing the best songs from the band that virtually invented Rock! Led Zeppelin guitarist Jimmy Page joined Chris and Rich Robinson and the rest of The Black Crowes to perform''Whole Lotta Love,''''Heartbreaker,''''What Is and What Should Never Be,'''Hey Hey What Can I Do'' and many more Zep favorites.

The band also ripped into blues classics like''Mellow Down Easy,''''Woke Up This Morning,'' the Yardbirds' classic''Shapes of Things'' and the early Fleetwood Mac number''Oh Well.' Now, over a decade later from the original release, this classic collaboration is available for the first time on vinyl. Spanning three discs on white vinyl,''Live at the Greek'' is a sterling recording of a legendary concert on the nights of October 18 and 19, 1999. This classic live collaboration is available for the first time on a Triple LP set pressed on white vinyl.'The combination of Page and the Crowes is a win-win.

Originally released in 1990, the debut record from Atlanta, GA's Black Crowes is pure rock and roll swagger in the mold of the Rolling Stones and the Faces. Could I've Been So Blind. Pressed at Qualtiy Record Pressings! Reissue Of The Black Crowes' Critically Acclaimed 1994 Album!

The songs on Amorica are some of the best the band ever wrote, stretching out into a hard, jam-oriented, funky bluesrock. No band celebrates the glory days of rock culture quite as enthusiastically. This Double LP set is now available on 180 gram vinyl in original packaging. The 12 insert includes artwork, credits and lyrics. Atlanta, GA's Black Crowes originally released this, their 3rd full length, in 1994.

Despite not having any hit singles Amorica is the band's finest effort to date, showcasing the laid-back swagger of leader Chris Robinson and the killer guitar work of brother Rich Robinson and Marc Ford, and some of the groups best songs. On Amorica, the Black Crowes finally come into their own, taking their cue from the most relaxed, groove-oriented tracks on their previous album. While the album contains no immediately obvious singles, the songs are the best the band has ever written, stretching out into a hard, jam-oriented, funky blues-rock. The Black Crowes' influences are still discernible -- no band celebrates the glory days of rock culture quite as enthusiastically -- but they use the music of the Stones, the Faces, and Little Feat much the same way the Stones used the music of Chuck Berry: it's a starting point that leads the band into a new direction, incorporating different musical genres, and making the music original.

That sense of reinterpretation is what keeps Amorica fresh. Pressed at Qualtiy Record Pressings. 12 insert includes artwork, credits and lyrics. Selections: LP 1 Side A.

It's illegal to falsify. FACTORY SEALED OUT OF PRINT PRODUCT is IRREPLACEABLE and therefore NOT RETURNABLE.

International Buyers are responsible for their countrys. Mymusicfix has been told we have the best collection of Rare, Out of Print music collectibles on E-Bay. The item "BLACK CROWES WARPAINT ORIGINAL PICTURE DISC & 7SINGLE + MONEY MAKER+JIMMY PAGE" is in sale since Thursday, July 23, 2015. This item is in the category "Music\Records". The seller is "mymusicfix2" and is located in Lake Forest, California.