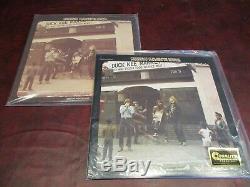 NOW OUT OF PRINT & TREMENDOUSLY RARE AUDIOPHILE MASTERED BY HOFFMAN & GRAY. PLUS WE ARE ADDING TO THIS RARE SINGLE THE QUALITY RECORDS COMPLETE AUDIOPHILE LP AT 33 & 1/3 SPEED ALSO OUT OF PRINT AND BECOMING RARE.

& FOUND ONE LAST SET FOREVER. Here's How it was done : FOR THE 45RPM SINGLE.

Using only the original analog master tapes, the renowned team of Steve Hoffman & Kevin Gray remastered and cut all of the titles at AcousTech Mastering, which features a pure Class-A disc-cutting system. AcousTech is located at Record Technology, Inc. The plant where the vinyl was pressed. It is a tremendous sonic advantage to have the pressing plant plating department & mastering room in the same facility as Steve & Kevin could cut a lacquer and plated immediately. This prevents the degradation of the grooves in a lacquer which is very fragile to quick deterioration.

And of course cutting at 45 speed is the audiophile choice for the highes quality. A 45-RPM record is sonically superior to a 33 1/3 variety because of a 35 percent reduction of groove curvature compared to a 33 1/3 cut..

It means that while you can't fit as much music into a 45, the undukations of the groove that your cartridge has to track are stretched over a longer distance. For these reissues, the music was displaced onto four sides, meaning each side contains about 10 minutes of music. This is the ultimate reissues.

The only way you'll get closer to this classic music is to listen to the master tapes or have been in the studio with the artist originally during the actual session. High definition analog vinyl pressing for superior fidelity. The nicest thing you can do for your stylus and ears.

The ultimate record the way music was meant to be heard. You should never pass up the opportunity to upgrade your collection. They're each very limited in their pressings and disappear with extraordinary quickness from the vinyl market. This causes prices to skyrocket because once they are gone, they are gone forever! Don't second-guess yourself with this chance to upgrade your collection because before you know it, the opportunity will have passed forever.

So popular was CCR worldwide that by 1970 the group was consistently scoring hits on both the A and B sides of its singles, a feat previously accomplished only by Elvis Presley and the Beatles. This release from November 1969 proved no exception, containing "Fortunate Son" and "Down On The Corner, " the latter becoming one of CCRs biggest hits to date. Fogertys fine gritty voice and his tight vocal overdubbing are standouts, along with his excellent renditions of "Cotton Fields" and Midnight Special. " All of those hits plus "It Came Out Of The Sky" and "Dont Look Now (It Aint You Or Me) are cut here at 45 RPM. It Came Out Of The Sky.

So popular was CCR worldwide that by 1970 the group was consistently scoring hits on both the A and B sides of its singles, a feat previously accomplished oby Elvis Presley and the Beatles. This LP, released in November 1969, proved no exception, containing "Fortunate Son" and "Down On The Corner, " the latter becoming one of CCR's biggest hits to date. Fogerty's fine gritty voice and his tight vocal overdubbing are standouts, along with his excellent renditions of "Cotton Fields" and Midnight Special. Willy And The Poorboys remained on the Billboard charts for 60 weeks, scoring as high as No. 3 and garnering the group's third platinum LP. "Sharp social criticism ("Fortunate Son") and party music ("Down on the Corner) take a ride on the Creedence bandwagon.

Side O' The Road 5. Mymusicfix has been told we have the best collection of Rare, Out of Print music collectibles on E-Bay. FACTORY SEALED OUT OF PRINT PRODUCT is IRREPLACEABLE and therefore NOT RETURNABLE. International Buyers are responsible for their countrys. The item "CREEDENCE CLEARWATER WILLY RARE 45 RPM 12 SINGLE 6 TRACKS + FULL 200 GRAM LP" is in sale since Saturday, March 14, 2015.