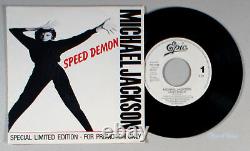 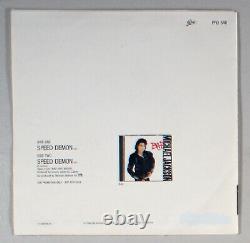 45, 7 single, vinyl, record, 1980s, 80s, Michael Jackson, Speed Demon, Bad, Quincy Jones, Moonwalker. When you order 3+ records. Search our store for more Michael Jackson music. All of our used records are play-graded and come in a protective outer-sleeve. WHITE-LABEL PROMO, with promo text on front, back, and label. Cover looks great; light scuffing and surface impressions (front/back). Minor shelf-wear along edges and corners. Opening is crisp with signs of light use and a few divots. Is a song by Michael Jackson from his seventh studio album.

It was written, composed and co-produced by Jackson, and produced by Quincy Jones. Is a funk rock song whose lyrics pertain to driving fast. Reportedly the song was originally planned to be released as an official single, but it was instead released as a promotional single.

A 7 single was produced to promote the single release of. As the song had become popular because of its use in the. , but the single release of. According to Jones, Jackson wrote the song after he received a traffic ticket, which caused him to arrive late to the recording studio. Jones told him to write about how he felt, which he did, thereby turning it into a song. Was part of Jackson's Bad album, Jackson did not perform the song during his. Nor any of his other tours.

The song was remixed by dubstep group Nero for the 25th anniversary of Bad. Portions of our "About the Record" section are taken from information gathered from Wikipedia and AllMusic. In their entirety and rated accordingly. We DO NOT necessarily make note of, or take into consideration, any visual imperfections that do not affect the sound while being played on our record players (your record player may give slightly different results). If you would like a visual description of the vinyl itself, please ask, and we will be happy to provide one for you.

To find other items and sign-up for our. Of newly-listed items and specials.

Please take note of the. (which is located at the top of the page, beneath the price box).

If you need your order more quickly, please select an expedited service at check-out. (it will be calculated at check-out or sent through an invoice). The best coupon is selected for you at checkout. Coupons do not combine with each other. Coupons do not apply when "best offer" is accepted. Applies to sealed old-stock and used vinyl. Another copy will replace it with different pictures and a different condition description, possibly even a different pressing. Keywords: 45, 7 single, vinyl, record, 1980s, 80s, Michael Jackson, Speed Demon, Bad, Quincy Jones, Moonwalker. The item "Michael Jackson Speed Demon (7 Single) (1989) Vinyl 45 PROMO IMPORT Bad" is in sale since Wednesday, May 5, 2021.

This item is in the category "Music\Vinyl Records". The seller is "record_vision" and is located in Waldorf, Maryland. This item can be shipped worldwide.