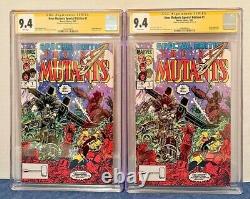 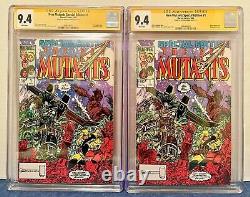 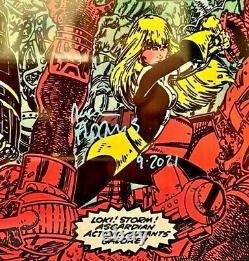 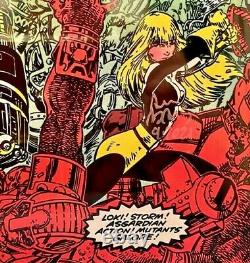 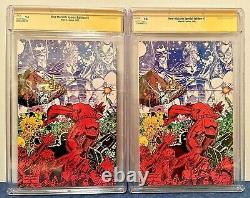 You are looking at a very cool comic lot. N e w M u t a n t s Special Edition 1 X 2. These are both 9.4 and signature series books signed by Arthur Adams. If you want both, let me know. I remember when the New Mutants came out in 1985.

I thought, what the heck are they trying to pull? 2 1/2 time regular cover price? As I took a closer look, I realized it was a double sized issue with a breathtaking wraparound cover.

This may have been the first time this was done? At least one of the first one's I'd seen. Art Adams incredibly detailed art. How does he fit all that in each panel?

He's been doing it for 36 years now. I've always thought of this book as part one of their Asgard adventure. The 2nd part is X-Men Annual 9 (1985). As I continued to read it, I thought to myself, yeah this might be worth the price. I have never bought an Art Adams book that I have been unhappy with. There have ever been 196 copies of New Mutants Special Edition 1 graded in total. 20 in a 9.4. That is only 40% signed.

Just so we're clear. The price listed is for one of the two copies of New Mutants Special Edition 1 in a 9.4, with Arthur Adams signature on the cover. Signed during an inhouse event hosted by CGC. Listed here on E-Bay right now.

Just got them back from CGC a few days ago. What's more rare than rare? Let's go with that. These books are 36 years old people. I don't know about you, but that blows my mind.

Where did the time go? I collected these when I was just a kid. Was I lucky or crazy enough to hold onto them for all these years?

Why would you want to? With Art's signature, t. Hese are incredibly rare books.

The kind you want to deal with. A collector who is slowly but surely placing his items with people who can appreciate and enjoy them like I have.

This item is in the category "Collectibles\Comic Books & Memorabilia\Comics\Comics & Graphic Novels". The seller is "myobsessionisyourbenefit" and is located in this country: US. This item can be shipped to United States.