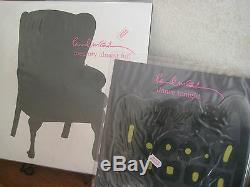 PAUL MCCARTNEY - MEMORY ALMOST FULL - RARE ORIGINAL U. RELEASE 2007 WITH JACKET ONLY RELEASE IN THE UK FOR THIS RELEASE + ORIGINAL SINGLE RELEASE OF DANCE TONIGHT - IF YOU'VE SEEN THIS SINGLE RELEASE AND THE SHAPE OF THIS RARE PIECE OF VINYL IT'S SIMPLY THE MOST UNIQUE SHAPE WE'VE EVER SEEN.

ONE OF OUR LAST COPIES FOREVER. To protect the covers from damage. Once inside the our wherehouse we then protectively seal the title in a loose re-sealable plastic cover to ensure the quality of the product. This title is brand new & never played condition. Don't Miss out BECAUSE THIS TITLE IS NOW CURRENTLY OUT OF PRINT AND COULD BE GONE FOREVER. & TYPE IN THEBEATLES OR PMCCARTNEY INTO THE SEARCH FIELD WITHIN OUR STORES SECTION AS YOUR PERSONAL CODE AND ALL INDIVIDUAL TITLES + INFORMATION WILL APPEAR. "Many years from now" must have seemed like an understatement to 16-year-old Paul McCartney, wondering if he'd still be needed or fed at the age of 64.

As it turned out, all doubt as to the latter had ceased by his 22nd birthday (though few could have predicted he'd end up washing down those meals with the liquid pride of Seattle). Now that McCartney, as of the date of this album's release, has reached that mythic age, his greatest work is 40 years behind him, his solo peak over 30 years gone. Does the world need a new Paul McCartney album?

The answer is yes, at least as much as it needs anything else that passes for music these days. With Memory Almost Full , Macca is back. No, it's not Ram or Band on the Run. It might not even be Flowers in the Dirt --in 1989, he had a full band, the support of Linda, and Elvis Costello as a collaborator.

Here, he's on his own. Literally: on the majority of the tracks, everything but the strings is multi-instrumentalist Paul.

But the surprise is that it's one of his freest, loosest affairs in years, sonically reminiscent of the Tug of War/Pipes of Peace era with nods to Abbey Road in the album-closing medley, McCartney's gravelly tones on "Gratitude, " and 2007's version of "Her Majesty, " the palate-cleansing Nod Your Head. " It's a surprise because of the album's inescapable sense of retrospection ("Ever Present Past, " "Vintage Clothes, " "That Was Me) and even a bit of weariness. The next-to-last song is "The End of the End, " after all, in which McCartney tells us about what he'd like to happen on the day that I die. " He wants "songs that were sung/to be hung out like blankets/that lovers have played on/and laid on while listening to songs that were sung, and will likely get his wish.

But it never gets overwhelming, for McCartney mostly resists his tendency to get plodding and maudlin. In fact, Memory Almost Full must be the most sanguine album made during the dissolution of a marriage since... "What went out is coming back, " he sings in "Vintage Clothes, " and from the sound of things, that may not be just wishful thinking. What's past is prologue; if we're lucky, what to come may be McCartney's late renaissance. PAUL MCCARTNEY - MEMORY ALMOST FULL UNIQUE SINGLE RELEASE - DANCE TONIGHT - ORIGINAL U.

RELEASE 2007 - THIS SINGLE HAS ONE OF THE MOST UNIQUE SHAPES EVER TO A SINGLE RELEASE AND IS A TRUE COLLECTORS PIECE. WENT OUT OF PRINT IMMEDIATELY AND GONE FROM THE COLLECTORS MARKET. You will be one of the last people in the world to own. This now rare out of print masterpiece of double heavy 180 gram vinyl. Don't Miss Out on one of the best Mccartney Recording ever produced. Check out Mymusicfix for additional Rare Audiophile recordings and to view our other items on Mymusicfix E-Bay Store. Mymusicfix has been told we have the best selection of Out of Print Audiophile music on E-Bay. Enjoy being one of the last few to own/collect this Heavy Vinyl Recording of musical history. OUT OF PRINT PRODUCT is IRREPLACEABLE and therefore NOT RETURNABLE. International Buyers are responsible for their countrys.

The item "PAUL MCCARTNEY MEMORY ALMOST FULL ORIGINAL RARE UK RELEASE LP + UNIQUE SINGLE" is in sale since Monday, June 6, 2011. This item is in the category "Music\Records". The seller is "mymusicfix2" and is located in Lake Forest, California. This item can be shipped worldwide.