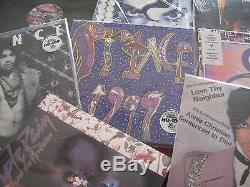 PLUS WE ARE ADDING TO THIS SET 4 180 GRAM AUDIOPHILE PRESSING OF PRINCE - 1999 DOUBLE LP SET - DIRTY MIND - PURPLE RAIN & CONTROVERSY. Prince 4Ever (Greatest Hits) 4 LP LIMITED EDITION Box Set. Prince 3 Nites In Miami, Night One 180 GRAM LIMITED EDITION 2LP (Colored Vinyl) SET. & TYPE IN PRINCE & R&B SOUL INTO THE SEARCH FIELD WITHIN OUR STORES SECTION AS YOUR PERSONAL CODE AND ALL INDIVIDUAL TITLES + INFORMATION WILL APPEAR. Analog vinyl pressing - the way music was meant to be heard. ALL Out of Print forever! THIS IS A ONE TIME OFFER AT THIS PRICE. There have been so few vinyl LPs produced over the last 5 years that you should never pass up the opportunity to upgrade your collection. They're each very limited in their pressings and disappear with extraordinary quickness from the vinyl market. This causes prices to skyrocket because once they are gone, they are gone forever! Don't second-guess yourself with this chance to upgrade your collection because before you know it, the opportunity will have passed forever. "THE BEAUTIFUL EXPERIENCE" LP - SELLS A LONE IN THE COLLECTORS MARKET FOR MORE THEN THE TOTAL PRICE OF THIS COLLECTION. A nice lil collection of pop-funk-R&B like jams courtesy of the Symbol we know as Prince.

My favorite track by far is TRACK TWO_ too smooth vocals, with a weird little swoosh-like sound effect loop that reminds me of something out of Sailor Moon. Prince delivers the Beautiful Girl song in diverse ways, some sound better than the band worked original. Track 1 is a Dance-Funk remake that you can shake your beautylisciousness to, track two is my groove choice (I like to put this one on repeat), track three delivers it even slower, so you can include on your Get-Jiggy compliation for that candlelit dinner for two. Then if you're a music lover, 4 & 5 dishes out the instrumentals in a funky way. Track 6 is the only one I have a problem with- and so does my beautiful girlfriend> she says, a girl never looks at herself in the mirror and think: this dress is too hot, he (her date) won't be able to sit still, so I won't wear it (like in song).

It's more like: This dress makes me look fat, (or even) this dress makes me look hot, yeah I'll wear it. Track 7 gives you the original song. If anything, learn the words to this song and sing it to your girlfriend at night, she'll think you're the Most Beautiful Guy in the world, and fellas that's all good.

Released in 1982, 1999 was the fifth album to be released by Prince. His breakthrough album was the first album to feature The Revolution and contains "1999", "Little Red Corvette" and "Delirious". The album was critically and commercially successful setting into motion two years of successful tours, hit singles and even a Hollywood movie. 1999 was ranked number 163 on Rolling Stone magazine's list of the 500 greatest albums of all time in 2003.

"I didn't want to do a double album, Prince said, "but I just kept on writing. Of course, I'm not one for editing. The second half of 1999 is just exceptional sex-obsessed dance music; the first half is the best fusion of rock and funk achieved to that date, and it lays out the blueprint for Prince's next decade.

Except for a few background hand claps and vocals, Prince plays most every instrument himself and creates a relentless, irresistible musical sequence of apocalypse ("1999") and the raunchy sex that he proposes as the only possible response "Little Red Corvette, " "Let's Pretend We're Married, " "Delirious" and, well, just about every other song on the album. Features: Premium HQ-180 Gram Vinyl Mastered by Chris Bellman at Bernie Grundman Mastering Pressed at RTI Replicates Original Packaging Selections: LP1 - Side 1: 1. Delirious LP1 - Side 2: 1.

CONTROVERSY - Mastered by Chris Bellman at Bernie Grundman Mastering & Pressed at RTI on 180g Vinyl! Prince's fourth album, Controversy, contains falsetto whoops, upbeat synthesizers, and funky bass lines, expanding on his previous album, Dirty Mind. The 1981 release peaked at number 21 on the U. Few artists have created a body of work as rich and varied as Prince. During the'80s, he emerged as one of the most singular talents of the rock & roll era, capable of seamlessly tying together pop, funk, folk, and rock.

Not only did he release a series of groundbreaking albums; he toured frequently, produced albums and wrote songs for many other artists, and recorded hundreds of songs that still lie unreleased in his vaults. With each album he released, Prince showed remarkable stylistic growth and musical diversity, constantly experimenting with different sounds, textures, and genres. Occasionally, his music can be maddeningly inconsistent because of this eclecticism, but his experiments frequently succeed; no other contemporary artist can blend so many diverse styles into a cohesive whole. Features: Premium HQ-180 Gram Vinyl Mastered by Chris Bellman at Bernie Grundman Mastering Pressed at RTI Replicates Original Packaging Includes Limited Edition Color Poster! Ronnie, Talk To Russia 6.

DIRTY MIND - Rolling Stone 500 Greatest Albums of All Time - Rated 206/500! The third studio album by the iconic pop star was originally released in 1980 and was produced, arranged and composed primarily by the artist himself. By the cover and the title, one could surmise the musical content would be primarily sexual in nature.

The critically acclaimed album debuted at number 63 on the U. A mix of slinky funk, synth-driven rock, jittery pop and sexual innuendo, Dirty Mind hinted where Prince was headed. It includes the world's merriest done-me-wrong song, "When You Were Mine, " and the incest ditty Sister. " "I wasn't being deliberately provocative, Prince said. I was being deliberately me.

Few artists have created a body of work as rich and varied as Prince. Features: Premium HQ-180 Gram Vinyl Mastered by Chris Bellman at Bernie Grundman Mastering Pressed at RTI Replicates Original Packaging Selections: 1. When You Were Mine 3.

Prince designed "Purple Rain" as the project that would make him a superstar, and surprisingly, that is exactly what happened. Simultaneously more focused and ambitious than any of his previous records, "Purple Rain" finds Prince consolidating his funk and R&B roots while moving boldly into pop, rock, and heavy metal with nine superbly crafted songs. Although Prince's songwriting is at a peak, the presence of the Revolution pulls the music into sharper focus, giving it a tougher, more aggressive edge.

Even with all of his new, but uncompromising, forays into pop Prince hasn't abandoned funk. Taken together, all of the stylistic experiments add up to a stunning statement of purpose that remains one of the most exciting rock & roll albums ever created. The blockbuster soundtrack to Prince's semi- autobiographical movie was raunchy enough to inspire Tipper Gore to form the Parents Music Resource Center. It also showcases Prince's abilities as a guitarist, especially on Let's Go Crazy. " The breakthrough hit, "When Doves Cry, has no bass track: Looking for a different sound, Prince removed it, making one more unforgettable single.

The title track was inspired by Bob Seger, of all people when Prince was touring behind 1999 Seger was playing many of the same markets. Prince didn't understand his appeal but decided to try writing a crossover hit, a ballad in the Seger mode. Take Me With U 3.

Prince 4Ever brings together many of PRINCEs best-loved songs, including the hits "When Doves Cry, " "Lets Go Crazy, " "Kiss, " "Little Red Corvette, " "Purple Rain, " "Raspberry Beret, " "Sign O The Times, " "Alphabet Street, " "Batdance, " and Cream. Prince endures as one of the most important, influential, and impactful artists in history. A 2004 Rock and Roll Hall of Fame Inductee, he garnered a 1985 Academy Award® in the category of Best Original Song Score for the film Purple Rain, a total of seven GRAMMY Awards®, a 2006 Golden Globe Award for Best Original Song in Happy Feet, and an American Music Award, among countless other accolades. He holds #27 on Rolling Stones list of the 100 Greatest Artists.

1984s Purple Rain remains a high watermark for Prince, changing the worlds of film and music. Known for his marathon shows, he delivered countless historic performances such as the Super Bowl XLI Halftime Show. Along the way, he collaborated with everyone from Michael Jackson, James Brown, Beyoncé and Amy Winehouse to Tom Petty, Madonna and Mary J.

In 2016, Prince passed, but his spirit continues to shine in the hearts and minds of fans worldwide. Includes the song "Moonbeam Levels", previously unavailable on LP. Exclusive photo art prints by Herb Ritts.

Selections: LP 1 Side 1. I Wanna Be Your Lover.

Why You Wanna Treat Me So Bad? If I Was Your Girlfriend. I Could Never Take The Place Of Your Man. Limited Edition 180g Colored Vinyl Double LP!

Coinciding with Prince's 36th birthday, this superb set was performed on the opening night of his Glam Slam club in Miami, in front of a packed audience of 1500. Following notorious conflicts with his record label, which culminated in him adopting the'love symbol' pseudonym, at the time he focused on performing only his newest material - as he tells the crowd. The majority of this music will never be released. I'm not signed to a record contract.

Prince is, I'm not. Packed with rare music, and originally broadcast on The Box Music Channel, this double LP set comes with an insert containing background notes and images, and is a treasure trove for Prince fans. Includes Background Notes & Images. Days Of Wild (Including Hair). Now (Including Babies Makin' Babies).

The Most Beautiful Girl In The World. "LET'S GO CRAZY" & "CITY EXOTIC".

PRINCE - DIAMONDS & PEARLS + THE NEW POWER GENERATION 12 SINGLE - WEA INTERNATIONAL/WARNER BROTHERS 1991 RELEASE. PRINCE THE MOST BEAUTIFUL GIRL IN THE WORLD BY BELLMAN RECORDS USA. OUT OF PRINT PRODUCT is IRREPLACEABLE and therefore NOT RETURNABLE. Because of Postal Regulations in following countries -- U. International Buyers are responsible for their countrys. Check out Mymusicfix E-Bay Store for additional Vinyl to view our current items up on E-Bay. The item "PRINCE THE BEAUTIFUL EXPERIENCE COLLECTION OF 12 SINGLES & 180 GRAM 14LPS + CDS" is in sale since Thursday, April 21, 2016.