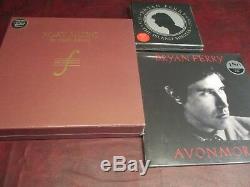 ROXY MUSIC & BRYAN FERRY COLLECTION - STARTS WITH THE. Roxy Music The Complete Studio Albums 180 GRAM LIMITED EDITION 8LP Box Set. + BRYAN FERRY'S 180 GRAM LP OF AVONMORE WITH GATEFOLD JACKET + CD. You should never pass up the opportunity to upgrade your collection. They're each very limited in their pressings and disappear with extraordinary quickness from the vinyl market.

This causes prices to skyrocket because once they are gone, they are gone forever! Don't second-guess yourself with this chance to upgrade your collection because before you know it, the opportunity will have passed forever.

This elegant vinyl release allows a new generation of music fans to discover why Roxy Music, with Bryan Ferry, Brian Eno for the first two albums, Andy Mackay, Phil Manzanera and Paul Thompson, is considered one of the most influential British bands: adventurous, bewildering, stylish, sexy and beguiling. For all their imitators and admirers, no one has ever successfully cloned the unique and indefinable fusion of elements that made Roxy Music. Aesthetically The Studio Albums takes its cue from the collectible, long-deleted vinyl set from 1980, Roxy Music The First 7 Albums. The eight albums: Roxy Music, For Your Pleasure, Stranded, Country Life, Siren, Manifesto, Flesh & Blood and Avalon were all international top ten chart hits. The songs were often vignettes, paeans to a world whose surface glitter hid heartache and loss: Do The Strand, Pyjamarama, Street Life, Love is The Drug, Mother of Pearl, In Every Dream Home a Heartache, Both Ends Burning, and More Than This. Roxy Music: The Complete Studio Albums was mastered in half-speed mastering at Abbey Road Studios by respected engineer Miles Showell. From their earliest steps, Roxy left a massive footprint on British popular culture. They were formed in 1971 by Ferry, Mackay and Brian Eno, the axis completed with Manzanera's official arrival early next year, by which time the music press was buzzing. Their self-titled debut album in the summer of'72 - declared by many then and ever since as the best first album ever - cleared the path for a saunter into the U.

Top five by the ravishingly stylish first single Virginia Plain. Before the year ended, Roxy had completed their opening tours of both the U. For once, fans in the industry and in the real world were unanimous: here was a triumph of style AND substance. Almost everything that happened chez Roxy during the next decade, and seven more studio albums, has become part of the fabric of rock history, from rule-trashing singles like "Pyjamarama, " "Street Life, " and "Love Is The Drug" to Bryan's ever-influential wardrobe and those legendary album covers. Three times they topped the album charts during their active lifetime, with 1973's Stranded, 1980's Flesh and Blood and their last studio album Avalon, and it wasn't long before the compilation album Street Life raced to No.

Half speed mastered at Abbey Road Studios. All original artwork reproduced in a high gloss finish.

In Every Dream Home a Heartache. The Thrill of It All. All I Want Is You. If It Takes All Night. Could It Happen To Me?

Bryan Ferry releases the 2014 studio album Avonmore. Johnny Marr, Nile Rodgers, and Marcus Miller are featured throughout the album, together with a shifting cast including Flea, Ronnie Spector, Mark Knopfler, and Maceo Parker. From the darkly driven title track, through to the contemplative "Soldier of Fortune, " from the swirling groove of "One Night Stand" to the dreamlike first single "Loop De Li" - Avonmore is both contemporary and classic. The two covers are unique Ferry musical interpretations - a beautiful and lush take on Sondheim's "Send In the Clowns" and Robert Palmer's "Johnny and Mary, " a collaboration with the Norwegian DJ and producer Todd Terje, transformed into a melancholic hymn of love and loss.

To view our current items up on E-Bay. Mymusicfix has been told we have the best collection of Rare, Out of Print music collectibles on E-Bay. FACTORY SEALED OUT OF PRINT PRODUCT is IRREPLACEABLE and therefore NOT RETURNABLE. Because of Postal Regulations in following countries -- U. (England, Ireland, Wales and Scotland), SOUTH AMERICAN COUNTRIES, QATAR, PHILIPPINES, SRI LANKA, ISRAEL, RUSSIA, MEXICO and MALTA.

The item "ROXY MUSIC STUDIO 8 ALBUMS 180 GRAM BOX SET + BRYAN FERRY LP + 45 SINGLES + CD" is in sale since Monday, November 5, 2018. This item is in the category "Music\Records". The seller is "mymusicfix2" and is located in Lake Forest, California.