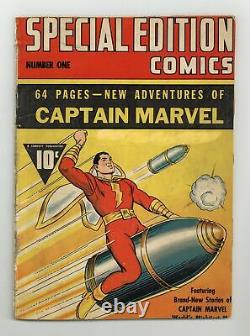 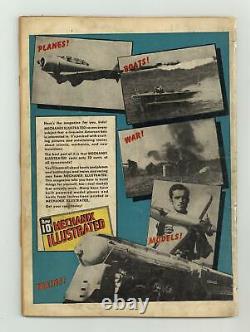 This is a low grade item. The story will be complete and readable, but the item itself will have major defects. Allowed defects for this grade include: vertical book-length crease, spine split up to two inches long, detached cover or centerfold, writing or other marks on the cover, major tears, piece or pieces missing, water damage, heavy discoloration or brittleness due to oxidation, and other types of discoloration, staining, or brittleness. Special Edition Comics #1, published in 1940 by Fawcett Publications, was the only issue of the title.

It appeared on the newsstands several months before Captain Marvel Adventures #1, and at the same time Whiz #8 was released. Note the costume of Captain Marvel shown on the cover. In this early version, he has a buckle on his sash with the initial M, does not have a buttoned shirt flap, and his arm bands are a bit different. Untitled story, script by Bill Parker, art by C.

Beck; Billy is stunned, like the rest of the crowd, when the challenger in the heavy weight boxing match knocks out the champion with one punch; Trying to get an interview, Billy learns the truth behind what happened and is captured by a giant ape who is actually Dr. Allirog, who works for Slaughter Slade.

Beck; Billy seeks to learn why there has been ten times as much damage by tornado, earthquake, hail storms, and floods than the previous. This item is a consignment. This item is a consignment, which means that the price has been set by the consignor rather than by MyComicShop. The grade and description for this item were assigned by MyComicShop's professional graders, not by the consignor. You can expect the same high quality, reliable grading on consignments that we provide on all other items we offer.

The item images for this listing are not stock images, they show the exact item offered. We take pride in our accurate, consistent grading. You can be confident in receiving a well-graded comic when ordering from us. We understand that condition is important to collectors. Orders are processed each weekday morning, so be sure to submit all orders quickly if you want us to combine them.

This item is in the category "Collectibles\Comic Books & Memorabilia\Comics\Comics & Graphic Novels". The seller is "mycomicshop" and is located in this country: US. This item can be shipped to United States.