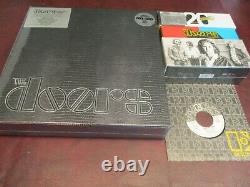 Collectors Note : This limited edition pressing is now out of print & gone from the last distributor that had any of these pressing left within their inventory. This means that this specific title is "Here Today but For Sure Gone Tomorrow Forever". So Don't Miss Out on adding this to your collection because mymusicfix only has a couple copies left forever. PLUS FOR THE COLLECTOR WE ARE ADDING The Doors The Singles Numbered Limited Edition 45 rpm 7" Vinyl 20 Singles Box Set Numbered, Limited Edition 45rpm 7" Vinyl 20 Singles Box Set! Mastered From Original Analog Single Masters!

Includes Meticulously Reproduced Original Sleeves & Labels Plus Poster! LASTLY FOR THE COLLECTOR - A SPECIAL VERY LIMITED EDITION 45 SINGLE OF LIGHT MY FIRE BOTH IN STEREO FULL LENGTH LONG VERSION 6:52 ON SIDE A AND MONO SINGLE VERSION 2:52 ON SIDE B. AGAIN ONLY A FEW HUNDRED OF THESE 45'S EVER PRESSED AND THE ONLY TIME EVER THAT BOTH THE STEREO AND MONO VERSIONS WERE EVER ON A SINGLE 45. THIS WILL BECOME PROBABLY THE RAREST DOORS 45 SINGLE EVER. THIS IS A ONE TIME OFFER.

THE DOORS BOX SET - The ultimate Doors collectible: A limited-edition, seven-LP box - covered in faux lizard skin - with 12 180-gram HQ vinyl reissues of the original stereo mixes of the band's six Morrison-era studio albums PLUS a copy of their'67 debut album in mono! All remastered by Bernie Grundman!

The box set will be available for a short time in a numbered limited edition run of strictly 12,500 copies worldwide! Originally this box set was announced as being limited to only 5,000 copies. The record label decided to change this number so that they could provide this great set to the European Market. 12,500 is the final and definitive number that is going to be pressed. This Limited Edition Box Set includes The Doors (Stereo Version), The Doors (Mono Version), Strange Days, Waiting For The Sun, The Soft Parade, Morrison Hotel & L.

Not To Touch The Earth 4. We Could Be So Good Together 10.

The WASP (Texas Radio And The Big Beat) 10. PLUS FOR THE COLLECTOR WE ARE ADDING The Doors The Singles Numbered Limited Edition 45 rpm 7 Vinyl 20 Singles Box Set.

Numbered, Limited Edition 45rpm 7 Vinyl 20 Singles Box Set! Singles with their corresponding B-sides on twenty 7-inch vinyl 45s with original sleeve art and labels, presented in an ornate, lift-top box. Limited to 10,000 copies worldwide. With an intoxicating, genre-blending sound, provocative and uncompromising songs, and the mesmerizing power of singer Jim Morrison's poetry and presence, The Doors had a transformative impact not only on popular music but on popular culture. The Doors' arrival on the rock scene in 1967 marked not only the start of a string of hit singles and albums that would become stone classics, but also of something much bigger - a new and deeper relationship between creators and audience.

They released six studio albums in all, as well as a live album and a compilation, before Morrison's death in 1971. Their electrifying achievements in the studio and onstage were unmatched in the annals of rock.

In the decades since The Doors' heyday, the foursome has loomed ever larger in the pantheon of rock - and they remain a touchstone of insurrectionary culture for writers, activists, visual artists and other creative communities. 20x 45rpm 7 Vinyl Singles. Numbered, Limited Edition - 10,000 copies.

Singles with original A & B sides. Mastered from the original analog single masters. Meticulously reproduced original sleeves and labels.

Rare, single versions of classic tracks from all of The Doors' landmark albums. Poster of singles covers from around the globe. Selections: 7 Single Vinyl 1 Side A.

Break On Through (To The Other Side) [Remastered]. End Of The Night (Remastered).

7 Single Vinyl 9 Side A. Tell All The People (Remastered).

7 Single Vinyl 19 Side A. 7 Single Vinyl 20 Side A. & TYPE IN THEDOORS INTO THE SEARCH FIELD WITHIN OUR STORES SECTION AS YOUR PERSONAL CODE AND ALL INDIVIDUAL TITLES + INFORMATION WILL APPEAR. Mymusicfix has been told we have the best collection of Rare, Out of Print music collectibles on E-Bay. FACTORY SEALED OUT OF PRINT PRODUCT is IRREPLACEABLE and therefore NOT RETURNABLE.

Because of Postal Regulations in following countries -- U. (England, Ireland, Wales and Scotland), SOUTH AMERICAN COUNTRIES, QATAR, PHILIPPINES, SRI LANKA, ISRAEL, RUSSIA, MEXICO and MALTA. The item "THE DOORS 7 LP 180 GRAM 33 & 1/3 INDIVIDUALLY LP & 45 SINGLES NUMBERED BOX SETS" is in sale since Tuesday, May 15, 2018. This item is in the category "Music\Records". The seller is "mymusicfix2" and is located in Lake Forest, California.