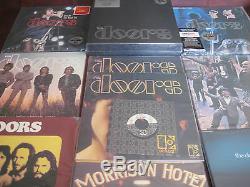 THIS LISTING NOT ONLY HAS THE SEALED OUT OF PRINT BOX SET. FOR COLLECTORS A BONUS OF AN EXTRA 7 INDIVIDUAL PRISTINE NEW 180 GRAM VINYL LP'S & JACKETS OF THE TITLES INCLUDED INSIDE THE BOX SET AS INDIVIDUAL LP'S TO PLAY SO THE COLLECTOR CAN KEEP THE BOX SET SEALED. AND THAT'S CORRECT YOU GET BOTH THE DOORS/THE DOORS LP IN BOTH THE STEREO AND MONO VERSIONS IN THE EXTRA SET.

THE MONO VERSION WAS ONLY AVAILABLE IN THE BOX AND AS A COLLECTOR IT'S PRICELESS. A SPECIAL VERY LIMITED EDITION 45 SINGLE. OF LIGHT MY FIRE BOTH IN STEREO LONG VERSION 6:52 ON SIDE A AND MONO SINGLE VERSION 2:52 ON SIDE B. ONLY A FEW HUNDRED OF THESE 45'S WERE EVER PRESSED IN THIS ONE TIME EVER 45 WITH BOTH THE STEREO AND MONO VERSIONS.

THIS WILL BECOME PROBABLY THE RAREST DOORS 45 SINGLE EVER. PLUS THE DOORS AUDIOPHILE 2 DOUBLE LP LIVE SETS OF ABSOLUTELY LIVE & LIVE AT THE HOLLYWOOD BOWL 1968. PLUS FREE BONUS CD - THE DOORS DOUBLE JEWEL CASE OUT OF PRINT BOX SET VOLUME TWO GREATEST HITS CD. SO YOU RECEIVED THE SEALED BOX SET WITH 7 LP'S - THE BONUS EACH OF THE LP'S INCLUDED IN THE BOX SO YOU CAN HAVE A BACK-UP TO THE BOX OF EACH TITLE AS WELL AS THERE JACKET FOR EACH LP ALL NEW PRESSINGS NEVER PLAYED. AND ABSOLUTELY LIVE 2 LP SET & LIVE AT THE HOLLYWOOD BOWL 1968.

A TOTAL OF 19 PIECES OF VINYL WITH JACKETS. THIS IS A ONE TIME ONLY PRICE ON THIS LISTING. THE DOORS BOX SET - The ultimate Doors collectible: A limited-edition, seven-LP box - covered in faux lizard skin - with 12 180-gram HQ vinyl reissues of the original stereo mixes of the band's six Morrison-era studio albums PLUS a copy of their'67 debut album in mono! All remastered by Bernie Grundman!

All albums are exact replicas of the original releases, including all artwork, packaging, and inner sleeves. The box set will be available for a short time in a numbered limited edition run of strictly 12,500 copies worldwide! Originally this box set was announced as being limited to only 5,000 copies.

The record label decided to change this number so that they could provide this great set to the European Market. 12,500 is the final and definitive number that is going to be pressed. This Limited Edition Box Set includes The Doors (Stereo Version), The Doors (Mono Version), Strange Days, Waiting For The Sun, The Soft Parade, Morrison Hotel & L.

Break On Through (To The Other Side) 2. Alabama Song (Whisky Bar) 6.

ABSOLUTELY LIVE - Featured in Michael Fremer's Heavy Rotation in the May 2010 Issue of Stereophile! Remastered by Bruce Botnick from the Original Analog Masters! Packages replicated to the finest detail!

Recorded at Doors concerts in 1969 and 1970, this incendiary double-live album contains well-known Doors tracks including "Who Do You Love" and "Break On Through". The set list is a fascinating ride through a mesmerizing and controversial concert experience with Jim Morrison, John Densmore, Robbie Krieger and Ray Manzarek. Features replica tip-on jacket (paper wrapped board).

Absolutely Live is the first live album released by The Doors in 1970. Many shows were recorded during the 1970 tour to create the "Absolutely Live" album. The Doors producer, and long time collaborator Paul Rothchild carefully edited the album from many different shows to create one cohesive concert. Some fans witnessed these performances firsthand, others vicariously through the headlines that seemed to follow every incendiary show.

Emerged as the document of a band pushing the limits of what was possible on stage... And in rock'n' roll itself. If you want to hear Jim Morrison recorded live and sounding as if hes directly in front of you in 3D, this gives it to you and the jacket promises no overdubs were involved.

Who Do You Love 2. Medley: Alabama Song Backdoor Song Love Hides Five To One 3.

Build Me A Woman 4. When The Music's Over LP 2 1. Break On Thru, #2 4. The Celebration Of The Lizard 5. Soul Kitchen Recorded from July 1969 to May 1970. THE DOORS LIVE AT THE BOWL'68 180 GRAM LIMITED EDITION 2LP SET. Historic Live 1968 Concert Pressed On 180g Vinyl Double LP! The Doors, one of the most influential and controversial rock bands of the 1960s, were formed in Los Angeles in 1965 by UCLA film students Ray Manzarek, keyboards, and Jim Morrison, vocals; with drummer John Densmore and guitarist Robby Krieger. The group never added a bass player, and their sound was dominated by Manzarek's electric organ work and Morrison's deep, sonorous voice, with which he sang and intoned his highly poetic lyrics. The group signed to Elektra Records in 1966 and released its first album, The Doors, featuring the hit "Light My Fire, " in 1967. Like "Light My Fire, " the debut album was a massive hit, and endures as one of the most exciting, groundbreaking recordings of the psychedelic era. Blending blues, classical, Eastern music, and pop into sinister but beguiling melodies, the band sounded like no other. With his rich, chilling vocals and somber poetic visions, Morrison explored the depths of the darkest and most thrilling aspects of the psychedelic experience. July 5, 1968, the legendary group The Doors played the Hollywood Bowl which is a concert considered to be their finest ever recorded.

Due to meticulous restoration of the audio, the historic live 1968 concert is now available in its entirety, including previously unissued "Hello, I Love You", "The WASP (Texas Radio and the Big Beat)", and "Spanish Caravan". Audio has been remixed and mastered from original multi-tracks by the group's engineer Bruce Botnick. This new restoration offers a stunning upgrade from earlier versions and gives fans the closest experience to being there live alongside Jim Morrison, John Densmore, Robby Krieger and Ray Manzarek who opined, You can hear it as if you were at the Hollywood Bowl, on stage with us. Features: 180g Vinyl Double LP Now Available for the First Time Mastered by Chris Bellman at Bernie Grundman Studios Includes 3 previously unreleased tracks from the performance Selections: LP1 - Side 1: 1. Show Start / Intro 2.

When the Music's Over 28. & TYPE IN THEDOORS OR OTHER ARTISTS HITS TITLES USE CODE BIGHITS INTO THE SEARCH FIELD WITHIN OUR STORES SECTION AS YOUR PERSONAL CODE AND ALL INDIVIDUAL TITLES + INFORMATION WILL APPEAR.

OUT OF PRINT PRODUCT is IRREPLACEABLE and therefore NOT RETURNABLE. Because of Postal Regulations in following countries -- U. International Buyers are responsible for their countrys. Mymusicfix has been told we have the best collection of Rare, Out of Print music collectibles on E-Bay. The item "THE DOORS 7 LP BOX SET 180 GRAM SEALED + 7 LP BONUS + SINGLE + LIVE LP'S + CD'S" is in sale since Wednesday, July 19, 2017.