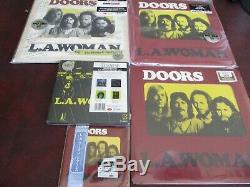 WOMAN - 180 GRAM FACTORY SEALED - JACKET EXACT TO THE ORIGINAL AND THESE GERMAN PRESSED TITLES FROM YEARS AGO NEVER HAD BARCODES ON THE JACKET FOR PRISTINE JACKETS FOR COLLECTORS AND COULD BE THE COPY YOU KEEP SEALED. PLUS - FOR COMPARISON OR AS YOUR PLAYER.

WOMAN USA PRESSING 180 GRAM RTI PRESSING. 40TH ANNIVERSARY SET WITH DOUBLE 180 GRAM LP SET. WOMAN SINGLES BOX WITH PREVIOUSLY UNRELEASED TRACKS. Woman: The Workshop Session 180 GRAM LIMITED EDITION 2 LP SET. Premium High Quality 180g Vinyl. Double LP - 3 Sides of previously unreleased music. Side 4 Contains no music but an etching of Track Listings and Lyrics. Mastered by Bruce Botnick, Bernie Grundman and Jac Holzman. Pressed at RTI and cut by Bernie Grundman. FOR YOUR CAR & HOME STEREO. JAPAN OBI REPLICA EXACT TO THE ORIGINAL LP JACKET IN A CD - ORIGINAL JAPAN RELEASE WPCR12721 WITH BONUS TRACKS AND OUR LAST COPY FOREVER. COLLECTORS NOTE: PLEASE NOTICE THAT THIS COPY DOES HAVE THE 2007 VERIFICATION STICKER TO ENSURE YOU ARE RECEIVING THE ORIGINAL REPLICA ISSUE. In-depth liner notes by Ben Fong-Torres. Two bonus tracks including "Orange County Suite" and (You Don't Need Meat) Don't Go No Further. THEDOORS AS YOUR SEARCH CODE. INTO THE SEARCH FIELD WITHIN OUR STORES SECTION AS YOUR PERSONAL CODE AND ALL INDIVIDUAL TITLES + INFORMATION WILL APPEAR. High definition vinyl pressing for superior fidelity. The nicest thing you can do for your stylus and ears. The ultimate record the way music was meant to be heard.

WOMAN IMPORT - 180 GRAM FACTORY SEALED - JACKET EXACT TO THE ORIGINAL AND THESE GERMAN PRESSED TITLES FROM YEARS AGO NEVER HAD BARCODES ON THE JACKET FOR PRISTINE JACKETS FOR COLLECTORS. He last official Doors studio album , L.

WOMAN , was still high on the charts when, like the "actor out on loan" of its closing track, " Riders on the Storm , " Jim Morrison died in a Paris bathtub in the summer of 1971. Via such tracks as "The Changeling, " " Crawling King Snake , " and the frothy, rollicking title track, the collection leaned heavily toward the blues--in particular, Morrison's boastful " Lizard King " brand of it. It also holds another entry in the band's ever-adventurous tone poems in the ever-underrated mythical tale of American music and culture, WASP (Texas Radio and the Big Beat).

Rolling Stone 500 Greatest Albums of All Time - Rated 364/500! Released in 1971, this instant classic gave the world Riders on the Storm, Love Her Madly, and the radio staple L.

"Jim Morrison said that the Doors wanted to "get back to what we did originally: just be very primitive in our approach, very relaxed. " Recorded in their rehearsal room with Morrison's mike set up in the bathroom, this was a bluesier, confident Doors, including "Love Her Madly" and "Riders on the Storm. Premium High Quality 180 Gram Pressing. Remastered by Bernie Grundman from the Original Master Tapes!

Cars Hiss By My Window. The WASP (Texas Radio And The Big Beat). 40th Anniversary 180 GRAM Vinyl Double LP Mastered at Bernie Grundman Mastering & Pressed at RTI! Rhino continues to give The Doors their due with this special 40th Anniversary Deluxe Edition of L. This two-disc collection contains rare and previously unreleased session outtakes and studio dialogue.

Recorded mostly live in their rehearsal space, the 10-song album was produced by the band with longtime engineer Bruce Botnick, who created a comfortable vibe in the studio. In an interview with Modern Drummer, Densmore recalled the L.

We just did a couple takes, on everything. There were some mistakes, and I would say, Ray, remember on Miles Davis Live At Carnegie Hall, on the intro of So What theres this horrible trumpet error? Miles said he didnt care, because of the feeling. Just passion in our rehearsal room, not in a fancy studio. It was the first punk album!

Selections: LP 1 Side 1. The WASP (Texas Radio and the Big Beat).

She Smells So Nice / Rock Me. No music - Etching of Track Listings and Lyrics. WOMAN SINGLES BOX - PRISTINE SEALED LIMITED EDITION COLLECTORS INDIVIDUALLY NUMBERED TO 4000 BOXES WORLDWIDE FEATURES PREVIOUSLY UNRELEASED ALTERNATE TRACKS IN REPLICA PICTURE SLEEVES FROM AROUND THE WORLD + A BONUS 7 INCH SINGLE WITH THE BANDS DIALOGUE FROM THE SESSIONS FOR L. ALSO INCLUDES A FULL SIZE REPLICA OF THE ORIGINAL L.

Doors 7" box set includes "The Changling, " "Riders on the Storm, " "Love Her Madly (all with rare alternate versions on the b-side) and fourth single of studio banter, artwork will include the original image of the naked woman nailed to the telephone pole. WOMAN - ORIGINAL RELEASE WPCR12721 WITH BONUS TRACKS AND OUR LAST COPY FOREVER. WHAT IS A JAPAN "MINI-LP-SLEEVE" CD? Have you ever lamented the loss of one of the 20th Century's great art forms, the 12 vinyl LP jacket? Then "mini-LP-sleeve" CD's may be for you. Mini-sleeve CDs are manufactured in Japan under license. The disc is packaged inside a 135MM X 135MM cardboard precision-miniature replica of the original classic vinyl-LP album.

Also, anything contained in the original LP, such as gatefolds, booklets, lyric sheets, posters, printed LP sleeves, stickers, embosses, special LP cover paper/inks/textures and/or die cuts, are precisely replicated and included. An English-language lyric sheet is always included, even if the original LP did not have printed lyrics. Then, there's the sonic quality: Mini-sleeves have dedicated remastering (20-Bit, 24-Bit, DSD, K2/K2HD, and/or HDCD), and can often be superior to the audio on the same title anywhere else in the world. There also may be bonus tracks unavailable elsewhere. Each Japan mini-sleeve has an "obi" ("oh-bee"), a removable Japan-language promotional strip.

The obi lists the Japan street date of that particular release, the catalog number, the mastering info, and often the original album's release date. Bonus tracks are only listed on the obi, maintaining the integrity of the original LP artwork. The obi's are collectable, and should not be discarded. All mini-sleeve releases are tremendously limited editions mainly pressed on future orders only and once released immediately out of print.

Japanese digitally re-mastered Mini LP replica Limited Edition Collection with OBI sash down the front VERY FEW pieces made world-wide and are immediately Out of Print. Recorded from the finest Original Masters available. Comes with anti-static sleeves similar to Vinyl LPs, Cardboard packaging like an LP. Actual miniaturized version of the 12 LP in 4 CD version.

Mymusicfix has been told we have the best collection of Rare, Out of Print music collectibles on E-Bay. The item "THE DOORS L. WOMAN RARE SET LP + SESSIONS 180 GRAM +SINGLES 45 BOX +JAPAN CD" is in sale since Thursday, August 16, 2018. This item is in the category "Music\Records". The seller is "mymusicfix2" and is located in Lake Forest, California.