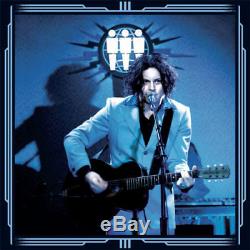 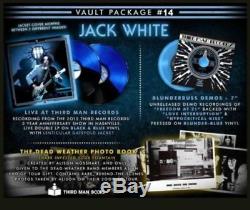 I have 19 years of 100% Feedback and always deliver. Brand new, never been played.

JACK WHITE LIVE AT THIRD MAN RECORDS DOUBLE LP The LP for this quarter will be a double album recording of Jack's live show, and solo debut, at Third Man Records from our 3 Year Anniversary Party on March 8th of this year. LP one takes in the set with the band of all lovely ladies, The Peacocks, backing him up and LP two is the second set featuring The Buzzards.

This is a fantastic and historical live document of Jack White and two fiery backing bands riding off the celebratory high spirits of the evening. The set took in classics from throughout Jack's career and showcased plenty of songs from Blunderbuss, which were heard for the first time that night for many. JACK WHITE FREEDOM AT 21, LOVE INTERRUPTION, HYPOCRITICAL KISS DEMO 7" The 7" for this package is very special indeed. Three Jack White bursts of inspiration captured in the moment only to be fleshed out in the studio later with a full backing band.

These recordings were done on Jack's trusty field recorder, and give an intimate glimpse into his recording and songwriting processl. The item "Third Man Vault #14 JACK WHITE 2 X LP Live At Third Man Plus 7 Single Vinyl" is in sale since Monday, December 3, 2018.

This item is in the category "Music\Records". The seller is "floodland3" and is located in Wenonah, New Jersey. This item can be shipped to United States.