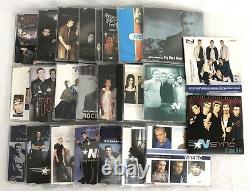 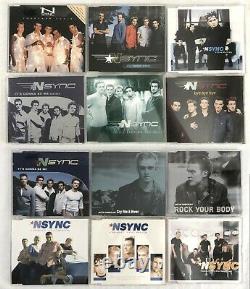 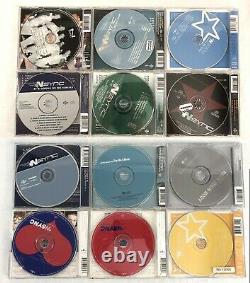 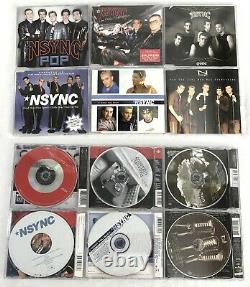 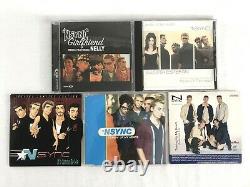 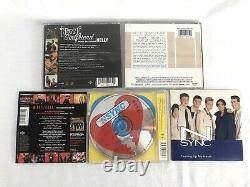 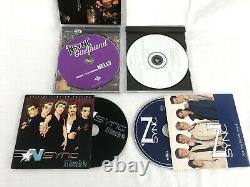 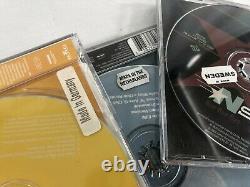 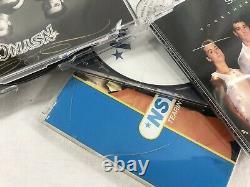 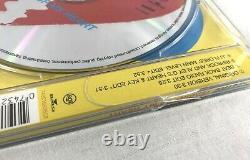 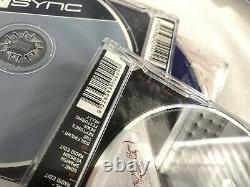 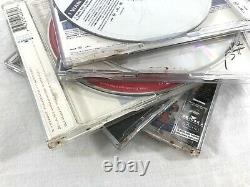 (23) NSYNC CDs - Singles, Imports and Special/Collector's Editions. Condition : Good to Mint Condition : History - I was a huge fan of NSYNC in the 90s/00s and made an effort to collect all the singles on CD, which many ended up being imports (non-USA).

Most of these CDs were listened to 1-3x max. For most of their life, they sat on a shelf or in a box. Music Sides : All of these CDs have mint or near-mint surfaces (the listening side). An occasional super light mark on maybe 2 that was so light I couldn't even photograph it. All were tested for playback in my computer and went successfully.

Jewel Cases : Most of these cases will have some general light scuffs or scratches in the plastic due to storage and movement - light wear and tear for a normal CD. Most are in much better condition than my regularly used CDs. A couple cases have cracks, one case has a completely broken hinge.

Some of the cases have rust colored markings/discolorations - I do not honestly remember how they got that way, but some to all of it should be cleanable with some effort. I included photographs showing all the major damages. I will list each individual CD below with any notable condition details. "For The Girl Who Has Everything" (UPC 743215079224) -- CD single. Includes remixes, the version where JC sings both verses, and bonus "The Lion Sleeps Tonight".

Manufactured in the EU (likely Germany). Notable conditions: Tiny patch of markings on music side of CD (not-photographable) - does not impact playback. "(God Must Have Spent) A Little More Time On You" (UPC 743216823727) -- CD single.

Features an enhanced CD with video footage (I did not test this). Includes live version of "Sailing". 2 tracks plus video footage.

Notable conditions: Small crack in case on one side (see photos, white CD in center). Has some of the rust colored markings along the bottom of the case, super light discoloration above band logo on CD itself. "I Want You Back" (UPC 078636533025) -- CD single. Includes remixes and a bonus callout hook. Notable conditions: Some rust colored markings along bottom of case, some on the paper insert.

Some rust colored markings at top hinge and across top. Some cracking up by the top hinge.

"Together Again" (UPC 743215201724) -- CD single. Includes two versions, a cd-rom track (I did not test this), songs "Giddy Up" and "Sundreams/Some Dreams" (called by two different names on the case vs CD). Notable conditions: Some of the rust markings at the lower corner of the case. A small crack near the back thin panel as well as on the front across Lance's head.

Includes the album and Nelly versions, as well as a remix of "Gone" and its Spanish version. "Music Of My Heart" (UPC 098707924521) -- CD single. Notable conditions: Has some sticker residue on back corner. "Thinking Of You (I Drive Myself Crazy)" (UPC 743216385522) -- CD single. Includes rare version with JC singing the first verse instead of Chris, and remixes.

Manufactured in the EU (Germany). Notable conditions: Has "Made in Germany" sticker on back.

If you have any additional questions. No International buyers - USA only.

Most items will automatically be combined and discounted when added to your cart. The item "(x23) LOT of NSYNC CDs Singles Imports Special Collector's Editions Very Rare" is in sale since Sunday, September 27, 2020. This item is in the category "Entertainment Memorabilia\Music Memorabilia\Rock & Pop\Artists N\N Sync".

The seller is "plastic-princess" and is located in Bayville, New Jersey. This item can be shipped to United States.